Its fair to say that despite the success of Ginger Wildheart’s previous fan-funded project ‘555%’, boosted by the backing of a loyal and long accumulated fanbase, his new venture Hey! Hello! was perhaps not quite drawing as much attention as his original PledgeMusic project had earned, although that was no reason, as Ginger recently put it on Twitter, for a certain rock weekly to allegedly not run a feature of any sort on the band or the album for not being ‘buzzy enough’. Cue a torrent of bellicose tweets from Ginger and a wave of publicity following its ‘surprise’ foray into the top 15 of the midweek UK album chart, and Hey! Hello!’s name was being shouted everywhere (well, almost).

Buzz or no buzz, Hey! Hello!’s debut album sees Ginger and New York rock chanteuse Victoria Liedtke team up for 10 tracks of sunshine-soaked pop-rock that shows the rock veteran’s knack for writing stunning choruses as he and Liedtke trade off, beginning with the single ‘Black Valentine’. From there the future classics keep coming; ‘Feral Days’ is awesome from start to finish, ‘Swimwear’ will have you there like swimwear, as the chorus goes, and then there ‘I’m Going to Kiss You Like I’m Going Away’, which sounds like one of the best songs Ginger never wrote for the Wildhearts. And let’s not forget ‘How I Survived the Punk Wars’, which feels like it came out an age ago now, but still remains brutally relevant to today’s decaying rock music scene, as Ginger and Liedtke warn up and comers ‘don’t eat the bullshit‘

Ginger himself proves adept at playing all the core instruments here, indeed for the first time as a drummer, and when you’re as in control as someone like Ginger is, the results can only look upwards. Industry ‘experts’ might well continue to be surprised, but why should we who are really in the know? You can always trust in Ginger to write a catchy chorus, to identify the personnel through whom he can really click – and he found a pearl in Liedtke, who exudes pure energy and positivity to her approach as a singer. It makes for absolutely essential listening, and it will live on long beyond this summer and next, through heatwave or thunderstorm.

We here at We Must Obey have not been immune to discussing the state of the British rock scene, and particularly when linked to the state of the mainstream rock press in this country. It therefore didn’t go unnoticed when Ginger Wildheart, a true stalwart of British rock music for the last 25 years, had a good few choice tweets aimed at lazy journalists and bands alike. Needless to say, when the main man behind The Wildhearts/ Hey! Hello!/Silver Ginger 5/Sonic Circus et al, put out an open invitation to answer questions on the matter, we seized the opportunity. To prove we’re not shy of the subject, we put some questions to Ginger to further discuss these points. Expect raw honesty and unflinching dialogue as we get into what angers Ginger most about how things operate within the scene today.

Do you think there is still a limited understanding of new models of releasing music, e.g. PledgeMusic, Bandcamp, Kickstarter, that is present in music media today?

Absolutely. People using Pledge sometimes think it’s a shortcut to making fans and an alternative to putting in the hard graft needed to fully establish your band. It’s not, it’s a pre-order scheme. You work to your numbers.

And people using Kickstarter sometime assume that it’s a charity from which huge donations arrive to pay for you to be a rock star. Both approaches are wildly inaccurate and certain career termination for the uninitiated. Bandcamp, Soundcloud etc, can also be misleading as bands sometimes mistake bedroom recordings, fit for the ears of friends only, to be a magic carpet to international success. Beginner demos shouldn’t be sent out to people who can help you. Play them to your friends and let them choose the best songs to record at a high enough standard to be presented.

How, in your opinion, has coverage of British rock music in the mainstream rock media changed since the 90’s?

Yes, about 100%. Media coverage is an utter sham these days. Too many editors have their heads in their arses, while trying desperately to insert their heads in the arses of the dozen big bands they favour. Magazines in the 90’s used to actually make bands and scenes a success due to their tireless support. These days it feels like the love has gone and been replaced by paranoia. The modern rock media plays it so safe today that I, for one, will be toasting their demise with the same glee that I celebrated the death of fat, greedy, clueless record labels.

Journalists aren’t getting out to enough smaller gigs, therefore the underground live circuit is suffering, and small bands are finding it harder and harder to get noticed unless they start dressing up in identikit clothes and accessories, like neck tattoos and flick fringe haircuts. Magazines should be championing bands that pride themselves on being unique and celebrating difference instead of pushing bands into a desired sound and shape. I blame the editors and advertisers, but journalists should also be actively pushing bands that deserve a break. It is, after all, their future too.

Its fair to say the internet has changed the way we discover new artists, but do you feel this is for better or worse?

The internet has just made things easier, which isn’t always better. Bands need to work harder than just sending bedroom standard recordings around and hoping for the best. Get out and play, and if your audience is small then fucking work harder. Bleed. Break yourself. Make a difference and make people take notice. Don’t be just another link to another lame version of a song that hasn’t been played live enough. Be killer live or consider another vocation.

The time for pussyfooting around is over. You need to keep your scene alive or you won’t have one.

Hey! Hello! – How I Survived The Punk Wars (official video)

The track ‘How I Survived The Punk Wars’ was an authoritative warning to bands not prepared to put in honest work for their success. Do you think such bands are as much to blame as the magazines, the blogs, the internet as a whole, etc. that cover them?

I dislike laziness in any form, whether it’s bands, journalists, radio or even artwork. It’s as if people are content to be merely better than the worst thing around. That just isn’t good enough. You have to work to be the BEST, full stop. You need to be better than Foo Fighters not just better than Cider Joe And The Carpet Smugglers.

Where do you see underground music heading without some sort of intervention?

Without some passion, invention and support it’s over. Plain and simple. Now don’t get me wrong, I believe that all these things exist in abundance, but no-one should forget that these are the essential ingredients needed to float this boat, and without all three you are effectively starving the scene of colour and quality. Underground music needs a community, otherwise it’ll lose the power it needs to get attention and change people’s fortunes. Starve it and you starve yourself.

And where do you believe things need to change?

Bigger bands and artists need to do their homework. Discover and take small bands out with them. Listen to your fans for what is going on in tiny venues. Magazines and radio need to devote more time and space to promoting small bands. Like I said it’s their future too. And smaller bands need to work harder to kick arse and make this happen. No one is going to get excited by deadbeat bands that all sound the same, y’know? Copy your record collection, and if you still sound like everyone else then you need a better record collection.

Do you believe the success of PledgeMusic releases, including ‘555%/100%’, point the way forward as a future model of releasing music and generating income for artists?

Only if they have an already existing fan base, otherwise they’re trying to eat before they’ve worked for the money to buy food. Be smart, work hard, get dirty.

Finally, going back to your music, you’re busy touring with Courtney Love as well as promoting the Hey! Hello! and Mutation releases – what else do you have planned ahead in your busy schedule?

When I get home from this, incidentally amazing tour, we take the Ginger Wildheart Band into the studio for our first proper album together, which I hope is going to really change the way people approach rock albums. Me included. I hope to really raise the bar on every level with this one. Then I’d like to write and record an acoustic album, something that people have been asking me about for years.

After that who knows? All I can tell you is that I don’t plan on slowing down anytime soon. This is my time and I plan on using it well.

I’d like to personally thank Ginger for answering my questions. Hey! Hello!’s self-titled debut album is now available at iTunes. 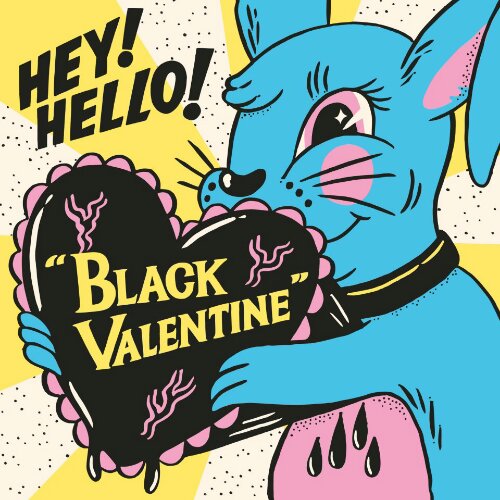 It’s Valentine’s Day, and to celebrate, Hey! Hello!, the new project by The Wildhearts and all round solo genius Ginger and Victoria Liedtke, have presented a Valentine’s Day gift with a name-your-price download of the track ‘Black Valentine’. As usual, it’s a quality pop rock gem with great interchanging vocals between the two. But be quick, it’s for a limited time only and won’t be as cheap as you like forever! Head here for the catch.

‘Black Valentine’ is taken from the forthcoming album ‘Hey! Hello!‘, which will be released soon through PledgeMusic. Any of you non-pledgers will be interested to hear a commercial release of the album is to come in April. More info via Hey! Hello!’s Bandcamp page.

[For reasons already explained, you’ll have to excuse my tardiness in posting this…]

Off the back of the incredible success of Ginger’s triple-album ‘555%‘ album, Ginger Wildheart has returned with a new video message announcing a second Pledge Music project – and this time, it’s a three-pronged assault!

The entirely fan-funded ‘555%‘ was released a couple of months back to widespread acclaim, and was outselling chart fodder such as Coldplay and Rihanna in the midweek chart! Now he’s after your support again with a different kind of beast. The first project is ‘Mutation‘, a two-album initiative that began back in 2011, but put on hold until now. ‘Mutation: The Frankenstein Effect‘ is album number one, with an as-yet-untitled second ‘Mutation‘ album also being brought to life as we speak. Also in the works is another new project, a pop-rock band called Hey! Hello, featuring Ginger and singer Victoria Liedtke, expected to feature ‘big choruses, big (noisy) guitars and big smiles’.

More information can be found at the project’s official page on Pledge Music, where a range of donation options are available in eventual return for the album and various other things. In the meantime, check out the launch video for the project below, filmed by the incomparable Ash Pears of AshTV, in which Ginger details exactly what to expect from this latest endeavour.

And in a further update, Ginger’s now annual birthday show has been announced at the London Kentish Town Forum on Saturday December 17th, and will be headlined by The Wildhearts! This is the first show the band have announced in three years, and will be the ONLY Wildhearts show this year and indeed for some foreseeable time. They’re selling like hot cakes, so get on it! Quick!!!