The date of this gig coincided nicely with the oncoming on my 30th birthday, for which I used this gig as sort of a celebratory gift. Indeed, to be able to go and witness two bands in their prime such as Oregon’s Yob, and Little Rock, Arkansas’ Pallbearer, is one of the best tickets a fan of such bands could ever ask for, and it’s no surprise the fans are gathering in droves outside the Brudenell Social Club, a top busy venue that’s been hoovering up the best gigs to LS6 in the wake of inner city venues closing.

I must say admittedly I didn’t go inside early for BongCauldron, who were lined up as the opening act for tonight’s double header (sorry lads), but judging from how they sounded from outside the venue they sound proper tight as a band and maybe next time I won’t leave it til nearly main event time to enter the venue. Really not like me at all but I don’t do nights out very often these days and I guess I got lost in the catching up.

That said, the headliners are the reason everyone is here, and a good proportion of that can be attributed to Pallbearer and their rapid rise in the ranks of heavy music. Now touring in support of their second album ‘Foundations of Burden‘, the quartet plough through a five song set that excites existing fans and surely scooped up many more in the process. ‘Watcher in the Dark’ sounds particularly devastating tonight with that opening riff, although the shredding solo is drowned out by the mix on offer. For the last two tracks they delve back into their rapturously received debut LP ‘Sorrow and Extinction‘, with closer ‘Given to the Grave’ proving to be as soul-crushing as always. This band do not waste riffs, and not a riff is wasted on the audience. The twin harmonies between frontman Brett Campbell and guitarist Devin Holt compliment each man considerably, but its the way the group harnesses their individual weight into a collective focus that highlights why they’ll soon be headlining their own tours outright on a regular basis. 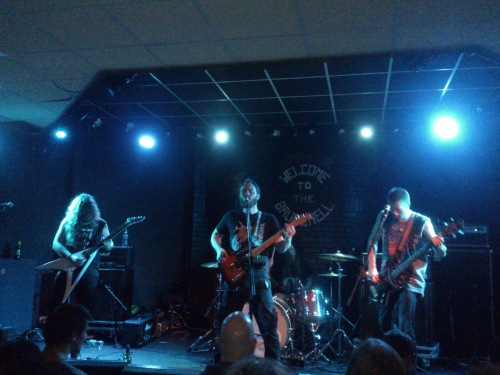 As a trio Yob don’t quite fill up the stage with such a presence as their contemporaries, but not that it’s ever mattered. Just because you number only three doesn’t mean you can’t make a thunderous noise and Yob over the years have evolved to make some of the most expansive and weightbearing doom ever heard. This is in evidence tonight as they dedicate the majority of their setlist to their new album ‘Clearing the Path to Ascend‘, and it’s a joy to hear the new tracks in the surroundings of the Brudenell. ‘Nothing to Win’ sounds particularly excellent, with the rolling drums stirring up a cauldron of tension with one hell of a release with the chorus, and ‘Marrow’ sounds absolutely majestic in a live setting. Just as it appears they’re done, members of the crowd shout for more and responding to one or two shouting for ‘Quantum Mystic’; they duly oblige, ‘by request’ and drop into the long time staple of their set, finishing off in style and making sure no one leaves the Brudenell shortchanged.

My camera packed up before I could get any decent pictures of Yob, sadly. All in all though, a top night and a complete show of excellence from two bands at respectively different points in their careers, pushing ahead at the forefront of doom metal.